Aircraft scatter is the process of scatter radio waves of the body of a traveling aircraft in order to enhance the distance possible to bridge on VHF, UHF and microwaves. We will call aircraft scatter "ACS" in this context.

ACS will give you the possibility to work VHF-UHF DX independent of weather conditions.

If you are a VHF - UHF ham operator, you have probably experienced ACS already. Even if you do not have worked a QSO via ACS you may have heard that DX station (<800 km distant) for just a fraction of a minute and then disappearing. Another effect is that if you are listening to a signal in the 200 to 400 km range that suddenly starts to fade violently with a fair amount of signal strength enhancement. After less then a minute the signal is back to the low troposcatter signal level again. Both of these situations are with good chance effects of ACS. If you understand the nature of ACS, it can of cause be used to make QSO's with distant stations.

Although known for many years, ACS has not been exploited to its full potential in an efficient way until recent years. See ref. [1] and [2].

On this web page I will try to explain some of the mechanisms behind ACS. My intent is to increase the interest and usage of ACS. I also provide some help to calculate the main parameters for an ACS communication link.

Aircrafts are traveling up to an altitude of 10 000 meters or more. The altitude of the aircraft determines the maximum distance possible to span. They travel at a speed up to 1000 km/h. This gives a maximum possible Doppler shift on the scatter signal.

In the RADAR literature you can find the expressions mono-static and bi-static RADAR. Mono-static means that the Tx and Rx are at the same site (location). Bi-static means that the Tx and Rx are NOT at the same site. ACS is a case of the bi-static situation. Also when discussing RADAR you use the expression Radar Cross Section (RCS), in the meaning of the apparent size of a target in square meters for radio waves. The RCS varies with the wavelength of the radio wave. The RCS is not the same as the physical size of the target (aircraft) but the size it appears to be when reflecting radio waves. The RCS is of cause dependant of the physical size of the target, but also of the way the target looks. One example is the stealth aircrafts that has a small ACS compared to its physical size, at least in some directions and aspect angles. The RCS can differ largely with aspect angle, i.e. how the radio wave hits the aircraft (rear, front, side etc.)  The RADAR literature states that the bi-static RCS in general is much larger than the mono-static. This is in favor for HAM ACS.

The most common path for HAM ACS QSO's is probably when the aircraft is at or very close to the great circle path between the two stations involved. From station A to the aircraft you have a path loss. At the scattering from the aircraft you can have a loss or a gain, depending on how the radio wave spreads or forms a beam. In some direction the radiation will be enhanced by the form of the scattering body of the aircraft. The last part is the path loss from the aircraft to station B. The total path loss is the sum of these three terms. In order to get a useable signal from station A to station B via ACS, the total station performance (transmitter power, antenna gain and receiver noise figure) must be greater than the total path loss.

Here is a simple, Excel based, path loss calculator to use for calculating your stations capability (beta version). It assumes line of sight, free space path loss conditions. The models that the calculations are based upon are not accurate to the single dB, but will give you a good understanding of what equipment that is needed for ACS communication on the VHF, UHF and microwave bands. It also calculates the maximum possible Doppler shift to expect for a specific operating frequency and aircraft speed. The models seem to give accurate results on the UHF bands (70, 23 and 13 cm) and somewhat pessimistic results on the microwave bands (6 and 3 cm).

The calculations are made using the following assumptions:

A few conclusions can be drawn by using the calculator: 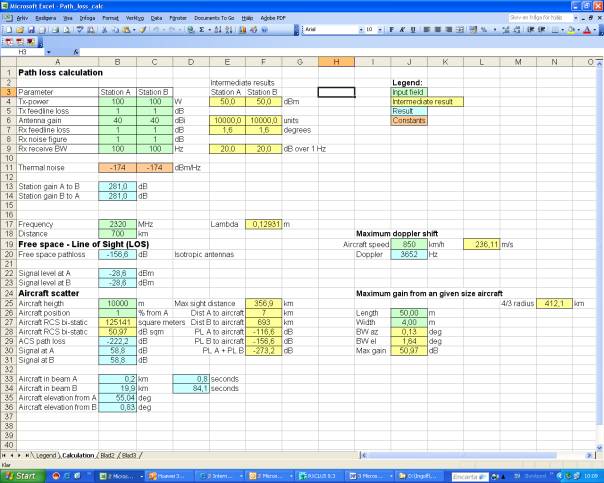 The time available when an aircraft is in the right position, gives propagation for usually less then one minute. This calls for a working QSO procedure. Use a calling sequence of 15 seconds for each station. Exchange only the most vital information for the QSO. Do not repeat every piece of information several times.

Using the time tables available from the different air carriers and airports, can be of great help in planning the skeds and operating times. Especially if you live in the neighborhood of an airport, using the time tables can be very efficient. When working in the direction of the airport landing and take off can be useful for ACS, even if the height of the aircraft is not that great. One such source of information for is Luftfartsverket. SK0CT describes a way to get live flight data via a receiver for the Aircraft Identification Link used on all aircrafts. See link [3] below. You can also follow a large part of the air traffic on the internet via the presentation of aircraft transponder ID’s that will show airline, type of aircraft, altitude and aircraft position on a syntizised map. See link [4] and [5] below for two such Swedish sites. Each link contains several receiver sites available. When correlating the aircrafts shown on the maps with visual observations it turns out that only 60 to 70 percent of the passing aircrafts show up on the transponder maps.

My experience from the airport of Landvetter, about 40 km distant in 35 degrees azimuth, is that I can work stations from 30 to 60 deg in azimuth 5 to 15 minutes before scheduled arrival and 5 to 15 minutes after scheduled departure seams to work with rather good rate of success. In spite of the lower altitude of the aircrafts ascending to and descending from the airport, it works fine up to distances over 500 km on 23 cm.

Today ACS is used on an regularly basis from 23 cm to 3 cm to work at least 500 km in the monthly Scandinavian microwave activity contests by several stations.

From my winter QTH in JO67AQ (with quite bad horizon in most directions), I can at a daily basis use ACS to hear both SK1UHF and OZ7IGY on 70 cm. I use very modest equipment: IC-706MkIIG with no external pre-amp, 6 element yagi in fixed direction (abt 135 deg az) only 4 m above ground. On top of that I have a neighbor (< 30 m away in 90 deg az) with four 434 MHz controlled light switches that produces a white noise of at least 10 dB above the normal noise level in my receiver with my antenna in 90 deg az. The antenna direction of 135 degrees is right at the southern approach / descend path  for the aircrafts entering or leaving the . The airport is about 15 km east of my winter QTH. SK1UHF is 369 km away in 92 deg az and OZ7IGY is 241 km away in 182 deg az. None of them are in the direction of my antenna, i.e. the ACS takes place with a 45 deg offset from the great circle path. The signal strength is not very good, but I can still hear them. Both beacons can come trough on tropo now and then, especially in the summer time. ACS can be heard on SK7MHL (229 km, 165 deg) and SK7MHH (295 km, 111 deg) as well, but they are more common guests on tropo as they are both more in the direction of my antenna beam. Correlation with visual observations of the aircraft, show that the best signal strength occurs when the aircraft is close to the great circle path rather then when it is in the main beam of the my small antenna. 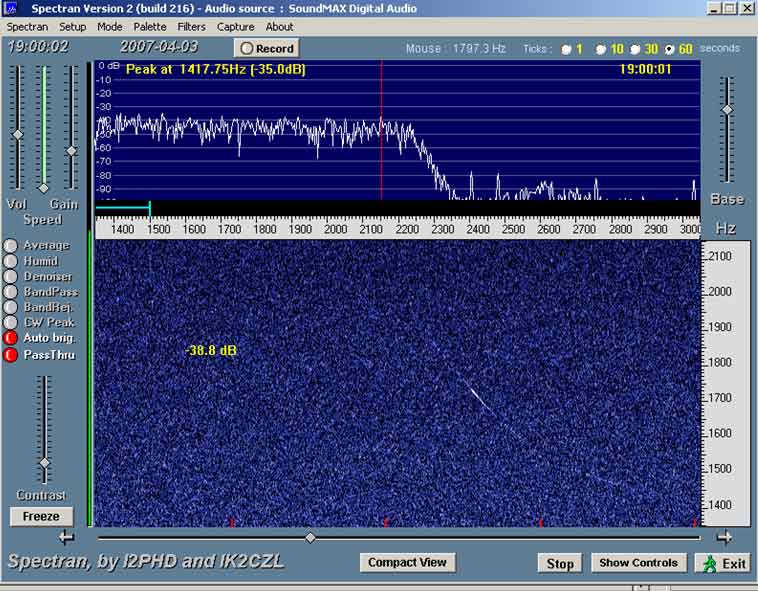 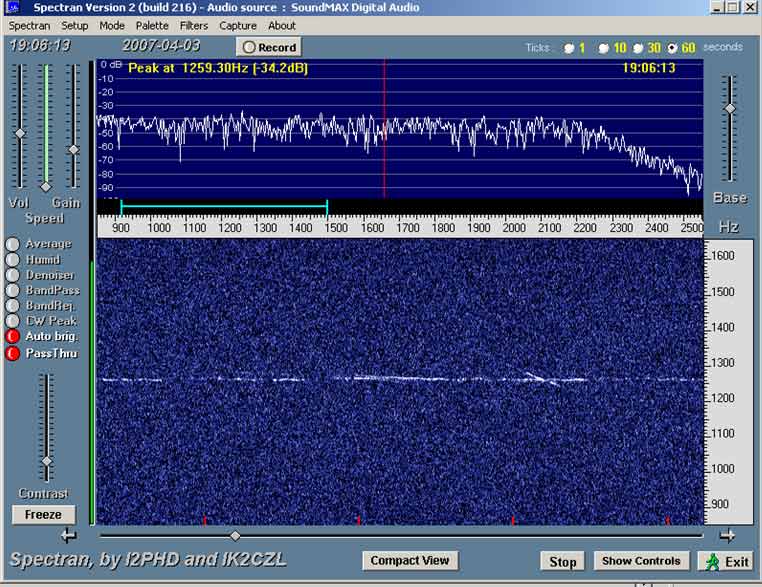 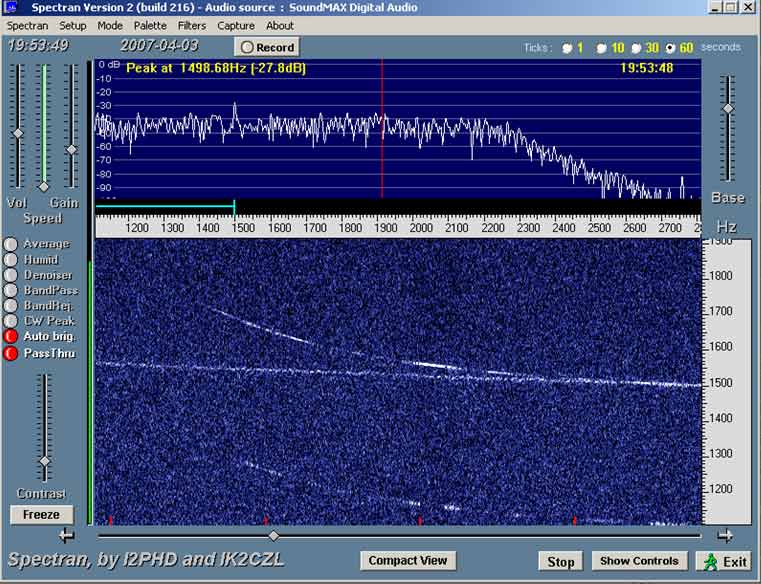 Figure 4. ACS trace from OZ7IGY (432.471 MHz). You can clearly see the beacons FSK of 400 Hz (space 400 Hz below mark). The straight trace is a artifact from my electronic neighborhood. 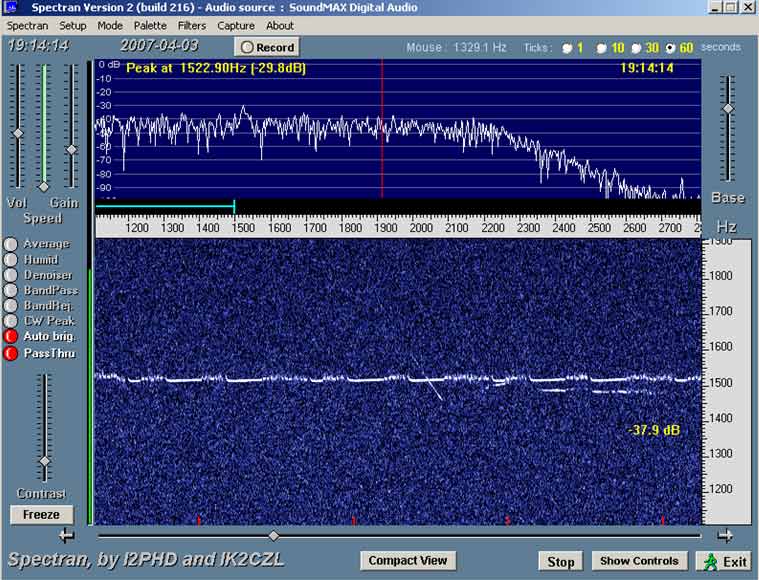 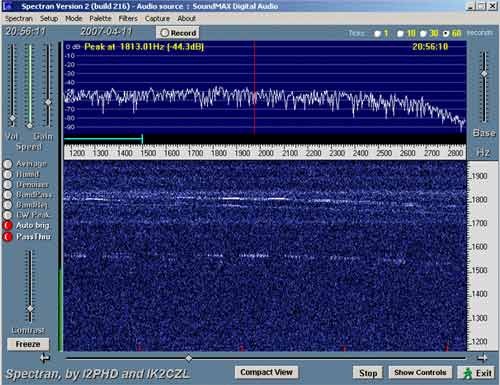 Figure 6. ACS trace from OZ7IGY on 50.021 MHz. You can clearly see the FSK space 300 Hz below the mark. The antenna used for this recording was a 5/8 lambda vertical (omnidirectional!!) antenna. 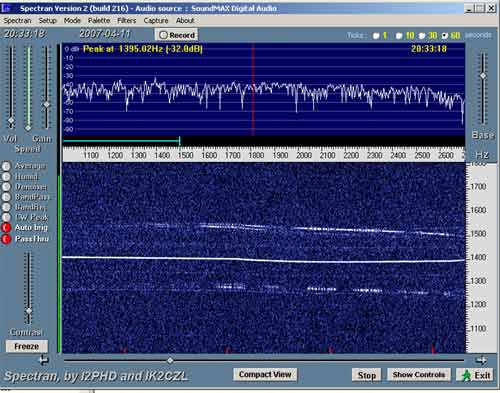 Figure 7. ACS trace from OZ7IGY on 70.021 MHz. You can clearly see the FSK space 250 Hz below the mark. The antenna used for this recording was a 1/4 lambda vertical (omnidirectional!!) antenna. The strong trace in the center is a artifact from my electronic neighborhood. 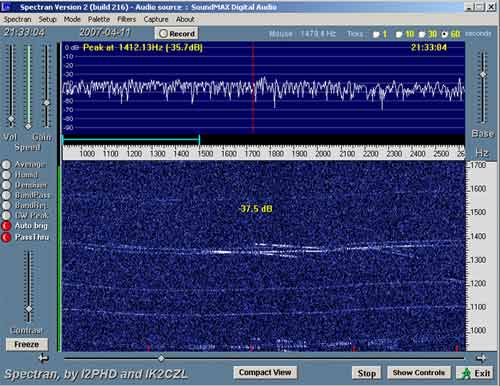 Figure 7. ACS trace from OZ7IGY on 144.471 MHz. You can clearly see the FSK space 400 Hz below the mark. The antenna used for this recording was a 1/2 lambda vertical (omnidirectional!!) antenna. Some of the weak traces are artifacts from my electronic neighborhood. You can also see that there are more the one reflecting aircraft with different doppler shift, actually three in parallel in the middle of the picture.

Above images were caught with Spectran while monitoring each beacons frequency. The receiver was set to USB and the displayed frequency was set to get the received signal at about 1500 Hz. The bandwidth of Spectran was set to 2.7 Hz. Each time tick (red) on the screen is one minute.

G3JKV has an article in RadCom March 2006 with an analysis of ACS.

Regrettably, there is not much to be found about ACS on the web. I hope the situation will change and more web sites dealing with ACS will pop up! These are the one I have found. Please give me info if you know any other.

[1] The following link will give more info about ACS experience in : http://www.users.bigpond.com/anvdg/propagation.htm

[3] SM0DFP, Per, describes how to use flight data available on the air for improved ACS and the results from his work: http://sk0ct.se/propagation/flygscatter1.htm

@ This page is under development and the links may not work as expected. The content of the text will also be updated. Check again soon and they can be updated!